Four rather edgier stories than our earlier collections for Hallowe’en and your kindle.

Ghostly goings on from Kate Blackadder, Jennifer Young and from Me, Anne Stenhouse. A thought provoking Bonfire Night story from Jane Riddell completes the number.

In those halcyon days when one could meet friends in a properly organised local restaurant, Black Ivy, for an evening meal, conversation turned to other local writers. One of my friends asked whether I was aware of David Muir’s series of diary-type books about our local area – and everything else under the sun.

I wasn’t – but I am now. Going Nowhere Slow – Autumn into Wonter is on my coffee table.

Muir is a retired science teacher and regular contributor to the New Scientist. He’s also had some imposed time taking life slowly after knee surgery and perhaps out of that comes these books.

As they are a retirement project and teachers do often retire at the end of the summer term, the first book is valid now. Therefore, I’m bringing it to your notice while you might still find the mushrooms, or are they toadstools, growing in your own back green. What purpose a review when it’s time to move onto vol 2 Winter into Spring?

This sort of book fills the Non-fiction slot I referred to in this month’s Round Robin admirably. It has sound science, it’s conversational in style, the writer doesn’t take himself too seriously while not falling into the overly chummy/silly brigade. I’m reading the diary entries as October rolls through – Lockdown needs this type of light in our growing darkness.

By the way, talking of darkness, a new anthology of Hallowe’en shivers is coming from Capital Writers – live, or dead, on 31st, for your kindle.

For regular diary readers – he won the scrabble last night. I was left with three ‘i’s and the ‘z’. Honestly – where does one go with that? Am re-reading Cousin Kate – that’s scary enough. What a brilliant writer Heyer was.

October’s Round Robin question is: What is your favorite book(s) of all time in
your favorite genre(s)? (You can include children’s books or non-fiction
or even magazines).

Sometimes a question seems to be easy-peasy and then, STOP PRESS, it’s anything but. What is my favourite book in a favourite genre?

How do we define ‘favourite’ for starters? Is it shown by the physical state the book has descended to? If so The Conceited Lamb must be high on my list. It was a ‘prize’ for perfect attendance so I’ve owned it for well over 60 years and clearly read it over and over when younger.

Also in this photo is a copy of JM Barrie’s Quality Street. The last time I appeared on stage was as a seventeen-year-old in the first act of Quality Street. It was a school production directed by the incomparable Dr MacQueen and great fun. This copy has wonderful pen and ink illustrations by Hugh Thomson. I always enjoy them.

The copy of Pride and Prejudice has lost its dust cover, but it, too, was a school prize. In 1960-61 it was considered suitable reading material for a primary age pupil. I wonder how it fares now? Was it responsible for my life-long attachment to and love of the Regency novel? Or was that the author of the other book here, Georgette Heyer. Difficult to tell. I love Jane Austen as it’s the moment when English becomes modern and, some slang aside, understandable to a twentieth century reader. Georgette Heyer’s work is so rich in detail and history. It is unflinching in the portrayal of the female state and its opposite, the male state.

However, it is funny. Many of the characters are unforgettable for reasons stretching from ‘charming’ to ‘diabolical’. Her language takes us into a world of its own. And, by and large, everyone has grey eyes. So much simpler to deal with when instructing the cover illustration.

Okay, here’s the shock horror moment: while I love a good story, and I do read modern writers as well as the comfortable old favourites, my preferred choice is often a non-fiction book.

I recently read Lara Maiklem’s wonderful Mudlarking. There are a lot of dropped pins in it, and a lot of which stairs are safest at low tide, but there’s so much more. In an easy, conversational style, she takes us along the shores of the Thames and brings in so much of the river’s history. I will read this one again.

Charge of the Parasols by Catriona Blake was recommended to me by medical friends when I said I was wrting about the Edinburgh Seven. I had to source it online, but I hope someone might reprint as it’s a joy.

And so to my own books. Rosalie, above, is the most recent. It’s a contemporary story, but it’s set in a David Bryce house of my imaginining. Who was David Bryce? A Victorian architect who worked in the country house market. I used to visit one of his mid-century houses as a guest and developed an interest in his work. His signature was often a small, round tower-like flourish. In the house I visited, they contained the loos.

I bought a catalogue from the Christian Aid book sale of works by him and other Victorian architects. Like so many things I’ve read, it came into its own as research material in due course.

A new adventure set in Maldington House will be released by My Weekly on 10th December. Title not yet known, but it is Christmas themed.

In the meantime, check back here for a fresh anthology from Capital Writers. It’s for Hallowe’en so there will be spooks.

My fellow Robins are below. Who are their favourites?

Are we out of Lockdown – no, not really. Avoiding shopping, buses, eating out and friends, relatives and neighbours is becoming all too familiar. Three cheers for Zoom, the telephone and knitting. DH and I couldn’t get slots for the Botanics at the weekend as they had all gone. While that is very good news for the Botanics, it’s a bit disappointing for us. We contented ourselves with a walk up to the local cemetery where the size and variety of trees in their autumn colours is good. Also collected some free cooking apples from a kind gardener – who’d posted both a notice and a bag of carrier bags. Thank you.

And the knitting? Nearly finished a child’s cardigan and making good progress with a sweater. Also doing some charity knitting. Crisis at Christmas will be operating differently this year as dormitory accommodation won’t do. Consequently the people who knit for them on a regular, year by year basis have been asked for blankets as well as socks. A younger relative has blogged about this and I’ve downloaded the details. Several of my friends are stepping up and we should manage a 20 square blanket in time.

Kate B at Penrith

These lovely ladies are my partners in Capital Writers. Together we’ve published

Separately, there are many more titles. But, drumroll, there’s another joint effort planned for Hallowe’en. Darker, grittier and altogether appropriate for sparklers and baked potatoes…

Call back for details.

Place is a strong prompt and motivator for my writing. Houses in particular spark my imagination.

I’ve said before that I don’t see people walking through walls – but hey, it’s a Hallowe’en story I’m in need of inspiration for. Who might have walked through the walls above or even entered by the doors? 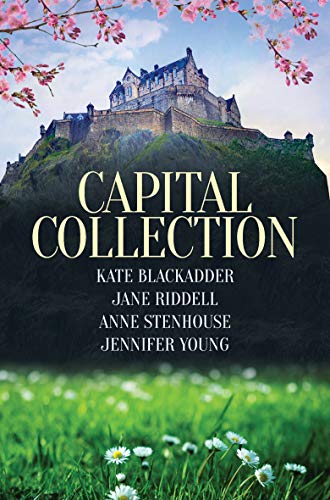 If you’ve enjoyed Capital Writers’ short stories before, then look out for our upcoming collection for Hallowe’en. Details to follow.

That apart, I’m working on a serial set in mid-nineteenth century Edinburgh. 1869 was a year like no other. From the People’s Friend to Sainsbury’s the world changed.