A friend took this picture when I was down in London for the RNA’s Winter Party. When will I be in London again? When will I go anywhere that needs one of my rather lovely jackets?

Who Knows. There’s quite a lot of out and about around here in the meantime.

To start with, I’ve been keeping a close eye on the various shop renovations going on. The corner shop now looks very splendid and is To Let. What will we get? The butcher’s has a way to go, but I live in hope. There’s only one property for sale in the street, but lots of workmen are appearing. We have a squad and there’s about to be some next door. Lots of the local shops have been freshened up – I had to remember not to reach out and touch the wall of the post office this morning. It’s brick red. One of the beauty parlours has gone for a quieter aqua.

Posted a ‘decade’ birthday card off to Canada. Brought in some toilet rolls! Put the freezer back on. Looking forward to stocking up on the household’s preferred bread. Saw our local bus running. Yay! Met loads of neighbours and guess what the main topic of conversation was? That’s right – masks. What is our cultural problem? 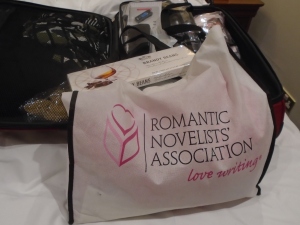 Not NanowriMo has had to cope with such a lot of other stuff. Not least of which was the RNA Winter Party. It takes several days of faffing around to make up name-badges for new attendees and those who took their badge away from an earlier meeting (you know who you are).I also have to think about and order the canapés – such an imposition, I can’t tell you!

This year there was an innovation when Goody Bags were donated by the lovely folk at Harper Collins. They had to be physically shifted from their delivery boxes onto the tables in the vestibule. I’m so grateful to the lovely Anna Louise Lucia and Mick Arnold for help moving them. I was truly exhausted the following day. Maybe joining a gym isn’t such a bad idea.

Next up was the fantastic Strathspey Ball organised by Isabel and Aileen in Boat of Garten. More moving – this time of tables, chairs, glasses, crockery etc. and then of the body in stirring Scottish reels, jigs and strathspeys. Don’t know about you, but I find strathspeys hard work, if lovely to dance and to watch.

So, the Not the NanoWriMo count? Maybe I’ll keep that to myself, but I did have 4 lovely days in Assynt where I saw the countryside under snow for the first time. How very beautiful it is. Writing was done and I think I see the way forward with my current Scottish Regency set in King Street and Heriot Row.

My apologies for the clunky links below, but WordPress won’t let me embed them. sigh!