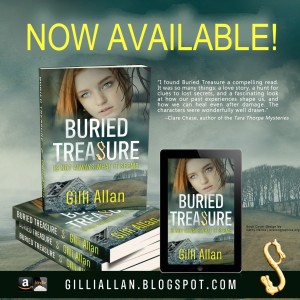 …and today there’s another double meaning in that title.

I’m delighted to post a copy of Gilli Allan‘s  cover reveal for her book Buried Treasure on  launch day. The blurb:

Jane thinks he sees her as shallow and ill-educated. Theo thinks she sees him as a snob, stuffy and out of touch.
Within the ancient precincts of the university the first encounter between the conference planner and the academic is accidental and unpromising. Just as well there’s no reason for them ever to meet again. But behind the armour they’ve each constructed from old scars, they’ve more in common than divides them. Both have an archaeological puzzle they are driven to solve. As their stories intertwine, their quest to uncover the past unearths more than expected.

The buy link is here

… and the second? Well, this diary has prompted an old schoolfriend to get in touch bringing me up-to-date with his life. After decades, it’s treasure indeed.

So, it was a heads down day yesterday although I did take an evening walk as my nose was bothering me. The wonderful local butcher’s is closed for re-furbishment and I wanted to check on progress.

Finished the first instalment of the draft serial and printed it off. I can already see one or two issues – that’s why you never send anything in straight away. Took advice about why I couldn’t get into the RNA conference site. Apparently copy and paste is the answer! It worked for me. Re-wrote the serial synopsis and will check that over this morning. Made a few phone calls but people are now out more – that’s nice – and only found two in. However, I do have a hairdressing appointment. DH played croquet and online bridge.

What changes are you seeing?