Courting the Countess was on offer from Endeavour Media at 99p Now available for £2.99 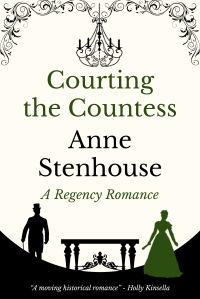 Lady Melissa Pateley is not having an easy time of it.

Her beloved husband Neville has died, and a fire at her London home has left her covered in scars.

If it wasn’t for a band of loyal servants, she’s not sure how she would survive.

Things take a turn for the worse when one day, Colonel Harry Gunn and his fellow soldier Zed break into her home, bundle her into a coach and kidnap her.

She is at a loss until she learns that Harry Gunn is the cousin of George Gunn, a man who has been stalking her for years, and that Harry’s Uncle John had warned him that as long as George is out there, Melissa is not safe.

But that very night George shows up at Harry’s home with Harry’s sister Lottie, who thinks Melissa and George would make a good match.

Perhaps Melissa would have been safer at home after all.

Yet even with her scars, she is certain that the handsome Colonel Gunn is attracted to her.

But of course, nothing is ever simple.

Startling revelations rip the family apart, causing everyone to question what they once held dear.

As Colonel Gunn goes in search of George and the truth, he has to wonder – had the keeping of secrets not marred more lives than the secrets would have destroyed?