George Square was built in the latter part of the eighteenth century and the architect named it after his brother, George Brown. 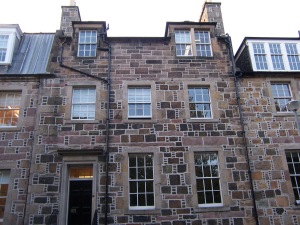 It was a very sought after and upmarket address when the Old Town began to spill out of the bands of habitation lining the Royal Mile from the castle down through the Lawn Market, past St Giles and on to Holyrood and the royal park.

Yesterday, I was in George Square to park and later retrieve the car. All around was the bustle of the Fringe Festival showing little sign of being in its final hours. Even so, I spared a moment for Bella, Charles, the Menzies’ household and the other characters I created for Bella’s Betrothal.